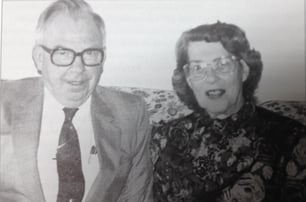 Marian Taylor, resident of Wesley Village, was born on March 26, 1922.

Her father was a Methodist pastor and she moved about quite a bit as a child, living in various parsonages in parishes where her father was assigned. Marian had a happy childhood, though she was constantly changing schools and making new friends. This is the life she knew and it fit seamlessly with the role she would later assume as the wife of a Methodist pastor.

When WWII ended in 1945, as part of an initiative to encourage peace in the far East, Americans traveled to Japan and South Korea to help rebuild these areas and re-establish the lives of the people in these countries. Different Conferences around the country were notified of the urgent need for volunteers, and the Methodist Board of Missions in the New York Conference responded to the call by contacting young people who were in graduate programs in colleges and universities, asking for volunteers for what would be a 3-year project. At the time, Marian was preparing to graduate from American University in Washington D.C. As a new graduate in the post-war era, job prospects were scarce. Since Marian had been active in the Methodist Church her whole life, she didn’t hesitate to respond to the call.

A group of 61 young people signed up from the New York Conference, including Marian. Their task was going to be to establish English classes for the Korean people. After a 6-week training program in the States, the group would board trains to San Francisco and from there, would head to the far East. At her training sessions, Marian met Lyman (Bud) Taylor who would later become her husband. Both were members of the New York Conference but lived in two different areas and had not previously met.

Marian and Bud were in the first group to head overseas. When boarding the train to California, she saw some belongings on a seat that she recognized as belonging to Bud. She sat down across the aisle and as they embarked on their journey across the world, got to know each other better. After arriving in Seoul, South Korea, Marian went to live in Mission housing with other women and Bud went to live with the men. One day, when Marian arrived home, she found a beautiful bouquet of flowers in a vase near the fireplace (it was rare to see flowers in Seoul at that time) and later discovered they were a gift from Bud. It was one year after the start of their mission that they “fell together” and their romance bloomed.

Marian and Bud married in a chapel in Seoul on Saturday, June 23, 1950. They “had a beautiful wedding” and enjoyed an “American style” reception complete with a flower girl and a ring bearer in a clubhouse built by the mission. Although their families were not able to be there, their friends from the mission group who were just like “brothers and sisters” attended. After the reception, Marian and Bud took off on a 6-hour drive for a 2-week honeymoon in a cabin on the beach.

On Sunday, the day after the wedding, the North Koreans attacked Seoul. All men, women, and children were evacuated either by aircraft or by ship. Someone from the mission volunteered to drive to areas outside of Seoul to notify those who had not been evacuated as to what had happened. Marian and Bud were placed in a jeep that would take them to Pocheon, South Korea. Marian recalls that there are many mountains on the way, and they went up and over “hill and dale” to reach their destination. In Pocheon, they happened upon an empty U.S. army barracks where they were able to spend the night and dine on canned soup before heading out of the country. The next day, a victory ship arrived to transport them to Japan. They had spent two years living in South Korea.

Bud and Marian spent two years in Anak, Japan where Bud taught English and Marian took care of the household and their son Larry, who had been born in Tokyo. When their missionary commitment was completed, Bud and Marian returned to the States. Their daughter Sandy was later born and Marian raised the children as Bud attended to his pastoral duties.

As Marian knew well, the life of a pastor’s family required moving from place to place and living in parsonages where assigned. Marian laughingly recalls the most difficult part of moving was “packing up the cartons of books” the couple acquired over the years. They would move into a new home, in a new location and often without any preview of where they would be living or what would be needed to furnish the home. While Marian has always proven to be very adaptable, she did have “difficulty picking up and leaving a place after building friendships with those who became like family.”

Throughout the years, in addition to raising her children, Marian held many jobs through the United Methodist Women, a group that advocates on behalf of women, children, and youth around the world. One of her roles was to run a summer mission school.

When Marian’s husband, Bud, retired in 1990 from the Annual Conference, the couple moved into a Wesley Heights Independent Living Cottage at Wesley Village the same day. Marian and Bud had known of Wesley Heights through the New York Conference of the United Methodist Church since it was built as a retirement community to replace the Danbury and West Haven Homes that were closing due to required renovation needs.

Within a year of moving to Wesley Heights, Bud was elected President of the Wesley Heights Resident Association. Marian covered several positions with the Association serving wherever was needed. Eventually she was elected as Secretary and served in that capacity from 1996-2008.

Marian recalls with great enthusiasm the many parties and celebrations she and her committee organized at the Shelton senior living community. She organized parties for every holiday or special occasion, St. Patrick’s Day and other parades. At one party, she created an American flag from plastic tablecloths as wide as the length of the dining room! She also reflects fondly on the time she made costumes for performers in the resident production of The Wizard of Oz.

Due to health issues, Bud moved to Bishop Wicke (the campus nursing home in Shelton) in 2012 and died later that year. Marian remained in her independent living cottage until she moved to the Wesley Heights Assisted Living Apartments in 2016, where she continues to enjoy community parties and church services.

Through Marian’s dedication to her church, her mission to improve the lives of others and her willingness to step up and help where needed, Marian has lived a selfless and rewarding life. Her fun-loving and creative nature radiates through Wesley Village and the community is lucky to be graced with her positivity and vibrant storytelling.

If you're interested in learning more about the UMH senior living community nearest you, contact us at 203.225.5024 or visit www.umh.org/schedule-a-tour-senior-living-connecticut-umh