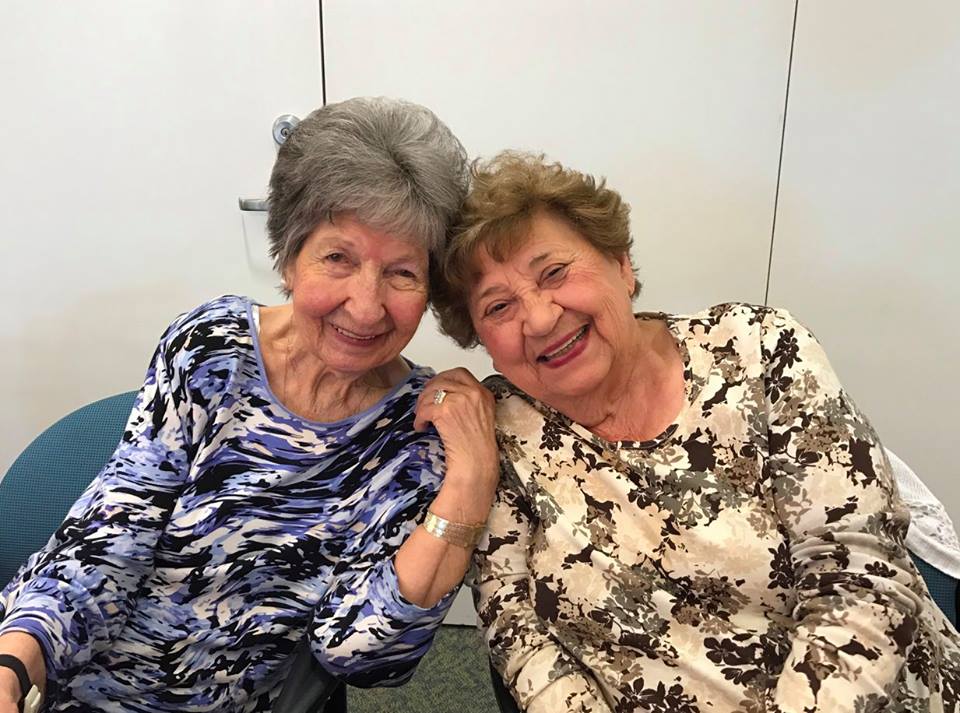 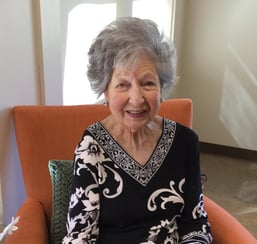 My name is Marie Pfannkuch. I am 100 years old and I’ve lived at Wesley Village for 10 years. My husband was German, which is where I get my last name from. My mother was Italian and my father was English and Irish.

Before we hear the rest of Marie's story, I (Chelsea) just wanted to say a few words about her. I met Marie when I learned she had received a letter from President Trump after turning 100 years old. She was very excited and wanted to show someone her letter. When I met Marie, I instantly liked her. She was funny, kind, beautiful on the inside and out, and I could tell she had an amazing story to tell. We worked around each other's schedules until finally we could meet up and I could learn more about her life. And I have to say, I thoroughly enjoyed talking with Marie. Her life has been filled with boundless love, family and friends. What more could a girl ask for? Read on to hear Marie's story.  I was born in the Springfield, Massachusetts hospital, and my parents always told me I didn’t wake up once the first night after being born – I slept through the entire evening!

One of my favorite childhood memories is visiting my grandmother’s sister because she had two children and I enjoyed them very much. When I went home that day, I found a pair of white ice skates in my closet and my mother said they were from Aunt Julia. I was very surprised.

I met my husband, Carl, during the Depression. His dad had lost his job and they moved into a small house in back of my property. He played with the other boys in the neighborhood and we all got together and played games at night after supper. They would go around and take the neighbors’ peaches or pears, whatever was on the trees. They even went into our grapes and my mother said “somebody’s been taking our grapes!” But I didn’t say who. When he was 14 years old, Carl told me he was going to marry me! When he first told me that, I told him he was crazy and then when he was 19, he really got to the point and said “let’s get married” and meant it.

He and his dad brought me to New York to meet his grandmother and they both had it all straightened out between the two of them. My husband said, “Well I’m going to take Marie into New York City”  and his dad said “Oh, I bought your stepmother a bracelet and she doesn’t want it so stop at the jewelers and tell them I don’t want it.” So, we went to the jewelers. He went to go talk to the man and I was looking at jewelry and a few days later, Carl’s brother came and told us there was a package waiting at the post office for us. Carl turned to me and said, “come on, come with me” and I said, “no, I’m happy on the beach.” He said “oh, come on. It’s just a short drive.” So, I went, and when he opened the box and there was a ring inside, I realized he’d talked to the man at the jewelry store and I hadn’t known anything about it. You just don’t think ahead (laughing). I had no idea it was coming.

After getting married, we adopted two children from the Catholic Bureau in Bridgeport when my husband came back from the war. My daughter passed away at age 45 and my son lives in Trumbull. I remember - my daughter was so cute when she came home from school one day she said “Sister told me you carried me under your heart.” Then she looked at me and said, “I forgot I’m adopted!”

When I went down to South Hamden where Carl was stationed when he got back from overseas, the housing woman said she did not take wives. At one point, she said she had a wife living at her place, but that was it. She finally felt sorry when my husband couldn’t find a place for me and we lived there for six months before we found a place of our own. She cried when I left, but that was alright because after the war, we even brought our children back to visit her. She invited us for the weekend. 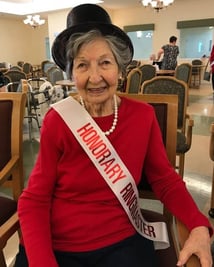 When I was younger, I enjoyed hobbies like skating, sledding, and going out when we were 14 or 15 years old. We kept busy though, and what I really miss the most is how very active and talkative my husband was. You didn’t go out and have dinner and just sit there and look at one another. He yapped the whole time and we always had a good time! And sometimes, we got into trouble because he’d be walking to our table and say “Well, it’s our anniversary. We’re going to have a good time tonight,” or something like that and then the next thing you know, someone would send us a glass of wine and say, “happy anniversary.” We were on the road one time and a couple sent us a piece of pie! I’ll never forget that (laughing), but they heard him talking about either a birthday or anniversary. I miss the most his conversations and being together like that.

One of the nicest things I remember Carl saying was when he was sick in bed one time and he said to me “Come on, let’s cuddle!” He still wanted me close. Until the day he passed, my husband would tell all his friends how beautiful his wife still was, this may years later.  It was quite something! He loved buying my lots of jewelry too! 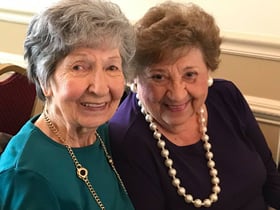 The best piece of advice I’ve received is to keep busy for as long as you can. Keep your mind active. I love to play cards and things like that. A piece of advice I’d give to the younger generation would be, like I say, keep busy, be happy, stay caring.

I first came to the cottages at Wesley Village and I lived there independently for three or four years with my dog, Cookie. When she passed away, I decided I wanted to come up to Wesley Heights assisted living because there was more of a chance for being friendly with people and playing cards. I was looking to play Bridge!

Most of the time, I spend my time playing cards in the afternoons at Wesley Heights. Also, my 100th birthday was fantastic! We even had relatives that came from Sweden, and we invited the residents I play cards with and some from the cottages too. They’re very good friends and that’s what counts. I first met them when I would take the bus from the cottages, and they invited me out to lunch and treated me. It was very nice. I occasionally go to the happy hour events offered at Wesley Village too.

I chose Wesley Village because it was the closest to my son. He lives in Trumbull and I lived in Trumbull bringing them up so it was close and convenient.