Everything you need to know about caring for your loved one - at home or at a senior living community.

Salty air, gently rocking boat, warm sunshine and the thrill of catching fish - sounds like life on the ocean! David Kruh, 3 year resident of Middlewoods of Farmington, spent most of his life on the Connecticut shoreline, having grown up in Old Saybrook. From an early age, he developed a love for fishing and the open water. Although David sometimes goes to Old Saybrook to fish with his brother, he admitted to staff members at Middlewoods of Farmington that he hadn’t been on a charter boat in a very long time. After hearing this, the Middlewoods Dream Team, led by Activities Director, Tanya Janeczko and Maintenance Director, Mike LaMere, worked to make David’s dream come true.

Celebrating Our Veterans This Fourth of July

Happy Fourth of July!  As we enjoy Independence Day, it’s important to remember that this day is SO much more than just a day off from work. Since 1776, July 4th has been celebrated as the birth of American independence. This national holiday is a symbol of patriotism and pride for all Americans, and while you enjoy your backyard barbecue, beach day, or fireworks, it’s important to remember who helped get us to where we are today – our veterans. 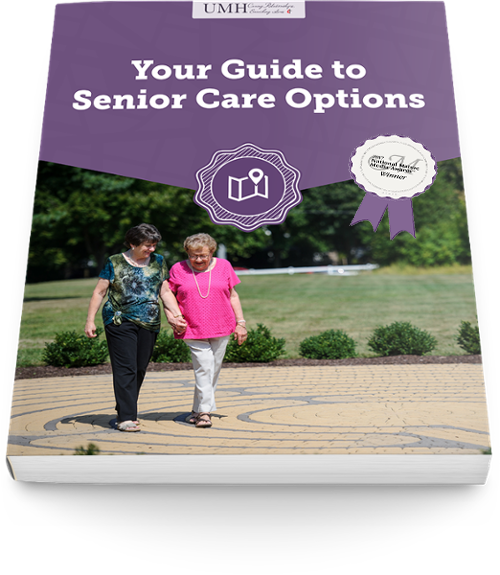 Journey of Dreams  |  Meet The Family  |  Stories and Spotlights

Through the award-winning Journey of Dreams program offered at UMH senior living communities, a committee of staff members have the opportunity to make residents’ lifelong dreams come true. Recently, the committee had the privilege of fulfilling Francis (Frank) Linden’s dream, who is in the unique position of being both an employee and a resident of Wesley Village. Frank comes from a small family, many of whom have passed. His father died was he was around 20 years old and his mother passed away 10 years later. Frank is an only child and he and Claudia never had children. Although his biological family is small, Frank has a close relationship with them and also with the co-workers he refers to fondly as his “work family.”

For Christmas, most families give their loved ones clothes, games, or sweets, but this Christmas, Don Walkley, a 92-year-old resident of Crosby Commons Assisted Living Community, received a 5,923 piece LEGO set of the Taj Mahal. Lining the shelves of his apartment are famous buildings Don’s built from intricate LEGO sets, including the White House, Eifel Tower, and the Lincoln Memorial, but none have compared in size to his new Taj Mahal display. Don’s family chipped in for Christmas and surprised him with the $300 puzzle and since December, Don has worked hours every day to complete the massive puzzle.

Marian Taylor, resident of Wesley Village, was born on March 26, 1922. Her father was a Methodist pastor and she moved about quite a bit as a child, living in various parsonages in parishes where her father was assigned. Marian had a happy childhood, though she was constantly changing schools and making new friends. This is the life she knew and it fit seamlessly with the role she would later assume as the wife of a Methodist pastor.

Is love at first sight really possible? Myrtle Caswell, 6 month resident of Middlewoods of Newington, would say “absolutely” and credits her 68 year marriage to true love. When Myrtle was 20 years old, she was seeing a young man named Bob. One night, Bob asked his friend, Everett, to drive him to see Myrtle. When Bob and Everett arrived at Myrtle’s house she wasn’t home, so they asked her mother where she was. Myrtle was next door babysitting, so they called her up and told her they wanted to come see her. Myrtle said no, and that no one was allowed to come over while she was babysitting. Bob and Everett waited at her house.

This month, our Resident Spotlight is a little different. Instead of interviewing a resident myself and writing a spotlight on them, this blog is written from the perspective of a resident. Loren Schave, 2 year resident of Middlewoods of Farmington, has a unique collection of memorabilia and recently hosted an open house for fellow residents to come and see his collection. Middlewood’s resident Susan Schwager met with Loren and interviewed him on the history of his collectables.

Today, we highlight a woman whose perseverance and strength have gotten her so far in life. With a musical background and a love for theater, it’s no surprise Norma Remele, 3 year resident of Wesley Heights, has a particular fondness of Phantom of the Opera. When Activities Director, Linda Fera, heard about Norma’s interest in this esteemed musical, she jumped into action to see what she could do with the UMH Journey of Dreams program.

As Jean’s father was in the construction business, the family moved often. Although born in Cambridge, Massachusetts, Jean lived in a number of states including Maryland, Virginia, Indiana and Washington State. She met her future husband, James Barbour, while attending Ohio State University where she graduated as a Registered Nurse.

My name is Marie Pfannkuch. I am 100 years old and I’ve lived at Wesley Village for 10 years. My husband was German, which is where I get my last name from. My mother was Italian and my father was English and Irish.  Before we hear the rest of Marie's story, I (Chelsea) just wanted to say a few words about her. I met Marie when I learned she had received a letter from President Trump after turning 100 years old. She was very excited and wanted to show someone her letter. When I met Marie, I instantly liked her. She was funny, kind, beautiful on the inside and out, and I could tell she had an amazing story to tell. We worked around each other's schedules until finally we could meet up and I could learn more about her life. And I have to say, I thoroughly enjoyed talking with Marie. Her life has been filled with boundless love, family and friends. What more could a girl ask for? Read on to hear Marie's story.

Although he was born in Haugesund, Norway, Arthur K. Hansen, better known as “Chuckken”, grew up in Glendale, Long Island. He attended Newtown High School in New York and was an active cross country runner. Additionally, he played softball and was a very good student. Read on to learn more about Arthur and his time living at the UMH community, Middlewoods of Newington.