Did you know smoking cigarettes kills more than 480,000 Americans each year, with more than 41,000 of these deaths from exposure to secondhand smoke? It’s true. According to the Centers for Disease Control and Prevention, “tobacco use remains the single largest preventable cause of death and disease in the United States.” It’s no wonder a large number of organizations around the United States have banned tobacco products from their locations. In the healthcare industry specifically, with so much evidence of the negative effects of tobacco use, there has been a huge push to go tobacco free.

United Methodist Homes (UMH) is thrilled to announce that as of November 1st, 2018, its three senior living locations, Middlewoods of Newington, Middlewoods of Farmington and Wesley Village will be tobacco free campuses. This regulation will benefit employees, residents and visitors and promote a healthier place to work and live. The policy represents an extension of UMH’s employee wellness initiative, encouraging and assisting employees to be as healthy as possible.

Ben Schiano, Executive Director of Wesley Heights on the Wesley Village campus, is eager to push a tobacco free environment. “We want to support our staff as they take the journey to become tobacco free. We are focused on the overall health and well-being of our team,” he explains. 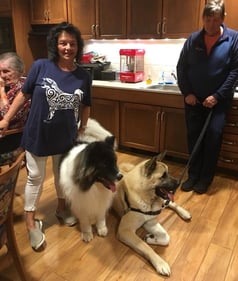 Diane Matikowski, RN at Wesley Village, was a long-time smoker up until three months ago. She has been inspired to share her story and encourage staff members through this company-wide transition.

Diane has been a nurse for twenty-six years and has worked at UMH for four and a half years. She is a huge animal lover and often brings her dogs to visit for pet therapy on the Wesley Village campus. She also enjoys making custom jewelry and spending time with her family. When she was in high school, Diane’s whole family smoked and most of her friends did too, so she picked up the habit. She smoked regularly until about twenty years ago, when she quit for ten years. However, as many smokers can relate, she fell back on her addiction during a very stressful time in her life.

Yet, this New Year’s Eve, Diane promised herself she was going to lose forty pounds, and when she did that, she was going to quit smoking. She stuck with her plan and today she is smoke-free. “It requires a lot of patience and support from your friends, family and spouse because of the emotional trauma of withdrawal,” she says.

She explains that when someone goes through a trauma, there generally is an outpouring of support. That’s how she felt when she first quit. She notes the importance of having on-going support, not just in the beginning of the process, because it is a long road and a support system is what motivates you to succeed. 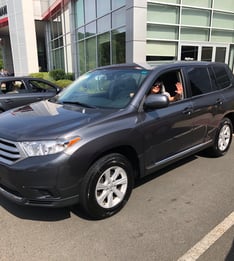 Diane is thrilled to share that the money she would have spent on cigarettes each month is now covering the cost of her car payments! Every time she drives her car, she's reminded of how far she's come.

Diane doesn’t mind exposure to smokers because she thinks that is what builds strength and solidifies the idea that this is a personal choice. She’s confident she can turn down temptations and even keeps a lighter and cigarettes in a drawer at home. Every day, she pats herself on the back because she knows it was her choice to not smoke.

To hear the rest of Diane’s story and her advice to smokers looking to quit, watch this video.