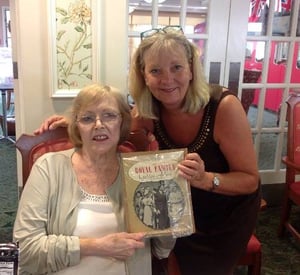 Shelton, CT (Monday, July 13, 2015) - Marie Bawol has lived as a resident of Crosby Commons Independent and Assisted Living Community for the past three years and has always dreamed of visiting England again. Although she has lived in the United States since she was 18 years old, Marie was born and raised in Liverpool, England.

She vividly remembers life during the bombings of World War II, and the difficulties that followed during and after the war. Even still, she longed for the chance to return again to the place she grew up, where many of her family members reside. After sharing her dream with Crosby staff, she was surprised with a special day to make her dream come true!

As part of the community’s Journey of Dreams program, staff and residents took “a trip to England” together with Marie! On Tuesday, June 30th, the community hosted a Tour of England celebration, with a traditional English meal prepared by the Crosby Commons Dining Services team, a tea party hosted by Bigelow Tea, and a musical performance by Brett Bottomley, who entertained residents on the Chapman Stick, a unique multi-string electric guitar.  Lectures on English history were offered throughout the day, as well as a fun photo booth opportunity, which featured a giant double-decker London city bus that was custom-built by a staff member. Residents and staff posed behind the bus windows for pictures, which were then transformed into postcards and sent to friends and family members.

In honor of her special day, Marie was presented with an album of photographs of the royal family, a china tea pot and tea cup, biscuits and jam, and English toffee. A champagne toast ended the day, along with a look back at the royal wedding celebration. “I didn’t realize the celebration was going to be so elaborate! It made me stop and think how lucky I am to have such a loving family here; at Crosby Commons and in England,” Marie said. “The day was absolutely fantastic.”

Crosby Commons Assisted Living Community is located on the Wesley Village Campus in Shelton, CT. The award-winning “Journey of Dreams” program was created on the campus to offer opportunities for personal growth and fulfillment of individual dreams. To learn more about Crosby Commons or other dreams that have been fulfilled for residents, visit www.crosbycommons.org or contact Lisa Bisson at 203.225.5024.

Photo Caption: Crosby Commons resident Marie Bawol poses for a photograph with her daughter, Alison Cotter, during a special “trip to England” celebration, part of the community’s Journey of Dreams program.