Middlewoods of Farmington Resident Recognized by the City Of Middletown

Farmington, CT (June 7, 2016) - Middlewoods of Farmington resident, Pierre Kennedy, was recently recognized by the City of Middletown for his military service and contributions to the community. He was honored with a proclamation from Middletown Mayor Daniel T. Drew, who proclaimed Sunday, May 15, 2016 as Pierre Jean Jacques Kennedy Day. Kennedy was greatly involved with the Connecticut Chapter of AMERICAN EX-POWs since its inception and after many years of dedicated service, resigned from his role as Chapter Adjutant on May 14, 2016. 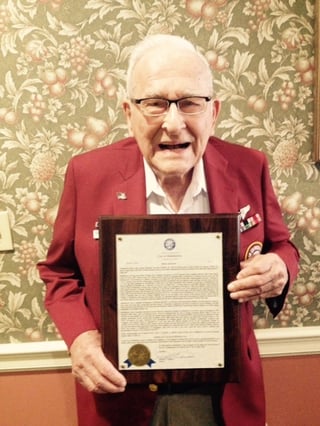 ennedy served during World War II as a sergeant tail gunner on B-24 Liberator heavy bombers with the 15th United States Army Air Force, 465th Bomb Group, 781 st Bomb Squadron based in Pantanella, Italy. He was shot down over the Blechhammer Oil Refineries in Eastern Germany. Sergeant Kennedy parachuted and was captured upon landing and German police took his two dog tags that contained his identification, which led to his being threatened with execution for having no identification and being suspected as a possible spy or saboteur. He was sent to Stalag Luft 4, a prison camp for some 9000 captured Allied airman at Gross Tychow, Pomerania, Poland. His prison camp was eventually evacuated when Russian armies advanced into Eastern Germany and Sergeant Kennedy took part in the 86 day forced march to the West. He was finally liberated from German control on May 2, 1945 and returned home later that spring in response to General Dwight D. Eisenhower’s promise to get the thousands of American airmen back to the United States as soon as possible.

Kennedy has shared these experiences with local school children and even researched and wrote a book about his family’s history in 1993. He has lived as a resident at Middlewoods of Farmington since 2012 and continues to remain very active and involved in the community’s events and volunteer efforts. “Pierre is dearly loved in our community and we were so excited to hear about how he was honored for his service and sacrifice in this way,” said Ginny Brown, Director of Community Relations at Middlewoods of Farmington. “We could never imagine our community without him. He is a treasure.”

Middlewoods of Farmington Independent and Assisted Living Community is affiliated with the UConn Health Center and is located at 509 Middle Road in Farmington. The award-winning community is owned and operated by United Methodist Homes, a local, not-for- profit, mission-based organization based in Shelton, CT. For more information about senior living at Middlewoods, please visit www.middlewoodsoffarmington.org or contact Ginny Brown at 860.284.5700.

Photo Caption: Middlewoods of Farmington resident, Pierre Kennedy receives a proclamation from the City of Middletown in honor of his military service and his contributions to the community.