Journey of Dreams at Crosby Commons 2014

At Crosby Commons Assisted Living Community, everyone understands that no matter what your age, you still have dreams; places you want to go, things you want to do, milestones to achieve. 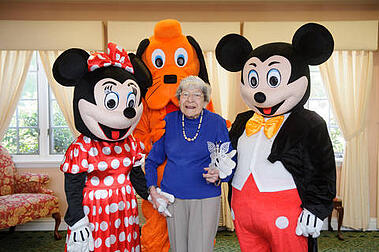 Ninety-nine year-old Crosby resident, Dorothy Cotton, had always wanted to go to Walt Disney World and never had the chance to visit the theme parks with her family. Her wish became part of the “Journey of Dreams” program and the Crosby team set to work making her dream come true. On Thursday, May 8th, Crosby Commons hosted “Disney Day” in honor of Dorothy, bringing the world of Walt Disney to the comfort of her home.

The day was filled with Disney-themed festivities, including a Disney parks travelogue, Disney trivia, a 3D roller coaster ride, Disney music by entertainer, John Redgate, photos with Disney characters, and a “Dance into Disney” performance by the Rita Tottenham School of Dance (Seymour, CT). Staff and residents joined in on the fun, wearing “Mickey Mouse” ears and dressing up for the occasion. Dorothy posed for a photo with “Mickey Mouse” and the gang after being crowned as a Disney princess and presented with a commemorative Walt Disney book, mug, and of course, a magic wand. “It was delightful,” she shared, “I enjoyed it tremendously. I had never been to Disney and finally it came to me.”

Crosby Commons Assisted Living Community is located on the Wesley Village Campus in Shelton, CT. The award-winning “Journey of Dreams” program was created on the campus to offer opportunities for personal growth and fulfillment of individual dreams 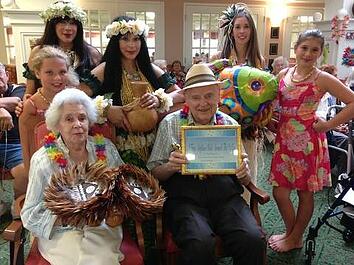 Though Hank Gambaccini has made his home at Crosby Commons Assisted Living Community for the past nine years, he has always dreamed of visiting Hawaii again. Hank was stationed in Hawaii for some time while he was in the armed forces and fell in love with the island but was never able to return. After sharing his dream with Crosby staff, he was surprised with a special day to make his dream come true!

As part of the community’s Journey of Dreams program, staff and residents took “a trip to Hawaii” together with Hank! On Tuesday, August 12th, the community hosted a luau celebration, with a special Hawaiian meal featuring a traditional roast pig prepared by the Crosby Commons Dining Services team, a chocolate dipping station, and a tiki bar with tropical drinks. Hawaiian dancers from Dancin’ in the City brought along the sounds and rhythms of the islands with a hula dance performance and to complete the experience, Hank (94 yrs. old) was presented with a palm tree trophy and a certificate for a complimentary plane ride over the Valley. “Hawaii brings back lovely memories,” Hank said. “Everything was very, very nice.”

Photo Caption: Crosby Commons resident, Hank Gambaccini (right front) smiles for a photo with fellow resident, Marion Prescott, (left front) and Hawaiian dancers from Dancin’ in the City during a special “trip to Hawaii” celebration, part of the community’s Journey of Dreams program. 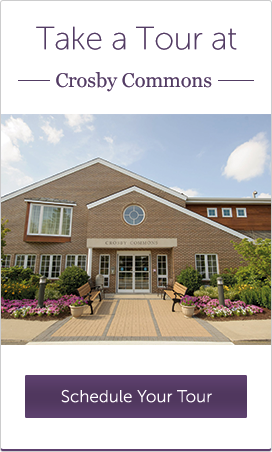 Is it time to get help?

Learn more about your options and decide the best fit for your senior care needs with this quick 4-5 minute survey powered by Roobrik.