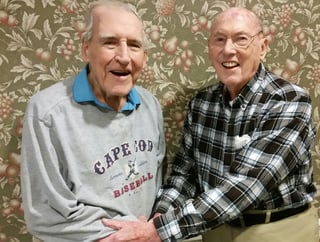 (Farmington, CT – February 23, 2016) - Middlewoods of Farmington resident and longtime coach, Joe Beidler was pleasantly surprised to learn one day that an old acquaintance of his would be moving in to the community he now calls home. Beidler, a graduate of Trinity College and Columbia University, coached football and baseball at several schools throughout his career including Trinity College (Hartford, CT), Whitman College, (Walla Walla, WA), Weaver High School (Hartford, CT), and Conard High School (West Hartford, CT) before his retirement in 1983. “I heard Bob McKee was moving to Middlewoods,” Beidler shared. “He and I coached several teams at Conard High School for a long time. I knew we would have a lot of catching up to do.”

And catching up was just what they did. Bob McKee was thrilled to see Joe Beidler again after so many years. “Joe is a throwback to the good old days,” he said. “I can’t believe that after years of coaching together I am now having supper with him every night – all in the family!” McKee, a graduate of Boston University, started his first coaching job at Hall High School right after the war, serving as football, baseball, and basketball coach from 1948 to 1957. He then went on to coach football, wrestling, and baseball at Conard High, between 1957 and 1984, with several distinctions and awards. 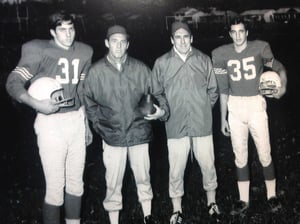 The two coaches were both teachers as well; McKee taught PE at both Hall High (West Hartford, CT) and Conard High, and Beidler taught PE and math at Weaver High and Conard High. After successful individual coaching careers, McKee and Beidler finally met at Conard and the two became professional colleagues in the world of student athletics.

Both coaches enjoyed many successful seasons at Conard. When asked about their memorable achievements, McKee admits, “There were too many to mention. I had a wonderful time coaching. I loved watching the athletics experience turn young boys into young men. It is thrilling to realize that a part of their success may be a result of their sports experience at the high school level.” Coach McKee was inducted into the Connecticut High School Coaches Hall of Fame in 1982 and his legacy continued at Conard High, with his son-in-law accepting the position as head football coach, the same position that his grandson now holds today. “All the coaches at Conard High School are McKees,” McKee laughs. 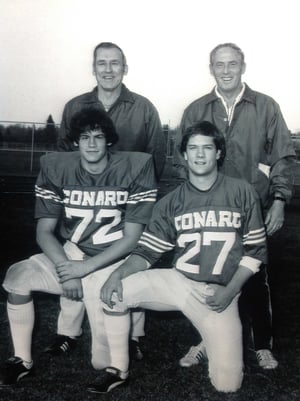 Beidler also found fulfillment in influencing young student athletes. He was invited as an honored guest to a 55th Weaver High School Reunion two summers ago. “It was so interesting to see everyone all grown up;” he shares, “the boys now men, and even their parents.” During his Weaver years he was responsible for helping to secure athletic scholarships for a group of multi-sport players who all attended Linfield College in Oregon. Over several years a number of young men went out west to meet with great success on and off the field. This was known as the “Hartford Connection”. Coach Beidler is still in touch with a number of these “boys” and is always happy to hear from them when they keep in touch.

When they are not reminiscing about their favorite coaching memories, McKee and Beidler keep busy with activities and events at Middlewoods of Farmington, following the Red Sox and other local sports from time to time. They chat about their coaching connections with fellow residents, staff, family members, and volunteers who are delighted to hear their stories and learn about how they were reunited in the same community after so many years. Both men continue to find meaning and purpose in the new friendships they have made and the chance to share their experiences with younger generations, whether they are sports fans or not. “I love it here,” McKee says. Reminiscing, he continues, “I have truly had a wonderful life. I feel so privileged to have been able to influence the lives of so many young men through coaching.” 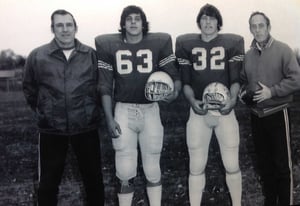 “Not all years were winning years,” Beidler always says, “but all years were good years of coaching and relationships. There were many friendships with coaches from other schools throughout the years. On and off the field, there were lessons from football and baseball that applied to all of life.”

To learn more about the community these two coaches now call home, contact Ginny Brown at 860.284.5700 or visit www.middlewoodsoffarmington.org. Middlewoods of Farmington offers award- winning assisted and independent senior living options and is affiliated with the UConn Health Center. The community is located at 509 Middle Road in Farmington and is owned and operated by United Methodist Homes, a local, mission-based, not-for-profit organization based in Shelton, CT.

Photos: Coach Joe Beidler (left) and Coach Bob McKee (right) pose for a photo at Middlewoods. Older photos are from Beidler and McKee’s days of coaching at Conard High School.