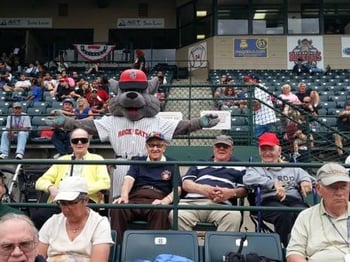 Residents of Middlewoods of Newington Independent and Assisted Living Community continued their annual Rock Cats Game tradition, Wednesday, June 17th, with a trip to New Britain Stadium for a night out at the ballpark.

The group was joined by staff and family members who all gathered in the parking lot for a pre-game tail-gate party before heading in to catch the first pitch, thrown by the Middlewoods of Newington mascot, “Woody the Bear”.

The event was organized by the Middlewoods of Newington team and also included staff, residents, and family members from their sister community, Middlewoods of Farmington. Both communities have been attending Rock Cats games and tailgating in the parking lot with their residents and families for the past six years, making “a night out at the ballpark” an annual tradition!

Middlewoods of Newington offers award-winning independent and assisted living at their community located at 2125 Main Street in Newington. For more information about senior living options at Middlewoods, contact Kathy Braga at 860.667.1336, visit www.middlewoodsofnewington.org, or plan to attend their upcoming open house, Saturday, July 11th from 10 am – 2pm.

Photo Caption: Middlewoods of Newington residents pose for a ballpark photo with “Rocky,” mascot for the New Britain Rock Cats.