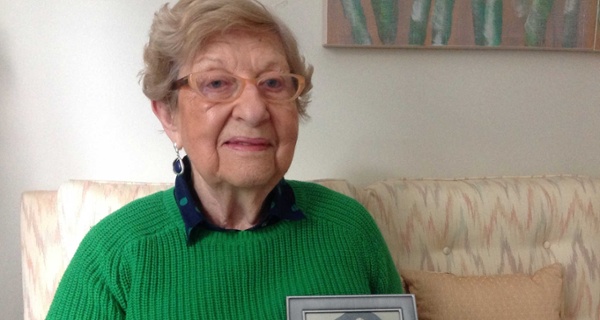 Meet Ruth Schless, a resident at one of our award-winning UMH senior living communities, Crosby Commons. Ruth moved to Crosby Commons (Shelton, CT) in the summer of 2015 and enjoys an active and comfortable life in her new home. “I love the fact that I have my own furniture from my family home here in my apartment at Crosby,” Ruth shared. Her home at Crosby, which is decorated with both style and comfort, is warm and welcoming for any guest.

Ruth grew up in Bridgeport, Connecticut and was a Bridgeport resident until her move to Crosby Commons. She attended Shelton School and Central High School in Bridgeport. Ruth shared fond memories of spending time at the Jewish Community Center and always trying to be a good person. “I made a promise to myself when I was young that I would never hurt my parents or do anything that would embarrass my family,” Ruth admits. “I have followed through with that promise my whole life.”

After high school, Ruth worked for General Electric Company and later met her husband, Bernie in 1941, in a pharmacy on her way to a basketball game. Bernie was actually playing basketball that night at the Jewish Community Center in Bridgeport. He was a great athlete and well known in the area. While she was shopping, Bernie asked Ruth if she would ever go out with him. She replied with “Are you asking me to go out with you?” Bernie said yes. Ruth and Bernie started dating and were engaged about a year later. Bernie proposed to Ruth and took her home to show his parents the ring. They were married on Nov. 30 th , 1947.

After getting married, Ruth and Bernie lived in North Bridgeport for many years and were married for 65 years! Their love resulted in two children (both boys), five grandchildren, and three great-grandchildren. One son currently lives in Denmark and has 3 boys and Ruth’s other son lives in Oregon and has a son and daughter. Ruth shared with us how very proud she is of her two sons and her 5 grandchildren and 3 great-grandchildren. She was thrilled that one of her grandsons and his girlfriend came to Connecticut from Denmark over the summer to help her sell her home and move into Crosby Commons.

Ruth is a very pleasant and active woman who enjoys her life at Crosby to the fullest. “Everyone has been very nice to me. I enjoy the many events and activities,” Ruth shared. My favorite meal? “The shrimp dinner.”

Reflecting on her life and sharing words of wisdom for younger generations, Ruth cautions us to “try and stay on the right track” and always try and “do the right thing.”

Ruth was interviewed by volunteers Christina Marino and Julie Hoff. Both girls are part of Girl Scout Troop 86, of Shelton, Connecticut, and are participating in our “Resident Spotlight” program as part of their Girl Scout community project. They are currently working to earn their Silver Award….many thanks to Christina and Julie for being part of this great project!