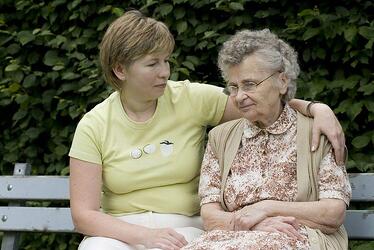 More than five million Americans are currently living with Alzheimer’s disease and this number is expected to skyrocket as the baby boomer generation continues to age.

Alzheimer’s is now the country’s sixth-leading cause of death; every sixty-seven seconds another American develops the disease.

Because early diagnosis and treatment can be critical in minimizing the progression of the disease, the Alzheimer’s Association has compiled these 10 early warning signs.

While typical aging may involve occasionally forgetting appointments and names, one of the most prevalent early signs of Alzheimer’s is recurrent memory loss.  If a loved one constantly forgets important names, dates and events -- particularly newly acquired information -- this may indicate more than age-related memory loss.

Everyone makes an occasional mistake when balancing a checkbook or computing a tip, but people with Alzheimer’s disease may demonstrate significant changes in the ability to solve basic problems, such as tracking monthly bills or following simple recipes.

People in the early stages of Alzheimer’s disease may experience newfound difficulties with even the most routine daily tasks, such as remembering the rules of a familiar card game or finding their way to the grocery store.

Forgetting what day it is, only to remember it later, is fairly typical in the senior years. However, confusion related to tracking the passage of time -- from days and weeks to seasons and years -- may indicate Alzheimer's. In particular, people with Alzheimer’s disease may not understand what's happening at any given movement or may be confused by why they’re at a particular place at a particular time.

Changes in vision are common among seniors, but people with Alzheimer’s disease may experience more significant problems, such as reading difficulties and trouble with identifying colors, contrast and distances. These issues can interfere with driving safety and these symptoms should not be dismissed.

If your aging loved one is frequently struggling when participating in conversations, this may be an early indication of Alzheimer’s disease. Other signs include verbal repetition, stopping mid-sentence, and calling known items or things by the wrong name.

Occasionally misplacing belongings is most often a typical age-related occurrence. However, if this becomes a recurring event and your loved one is unable to retrace his/her steps, it may be an early sign of Alzheimer’s disease.  He/she may also put things in unexpected places and accuse people of stealing.

Avoiding social activities, work gatherings and favorite hobbies can be an early sign of Alzheimer’s. If your loved one is turning down previously enjoyed activities, he/she may be concerned about revealing other Alzheimer’s-related symptoms.

Most older adults thrive on routines and can become frustrated or angry when their schedules are disturbed. However, people with Alzheimer’s disease can experience extreme feelings of anxiety, confusion, depression, and suspicion even under the least threatening conditions.