Healthy Aging at United Methodist Homes: Live to be 120! 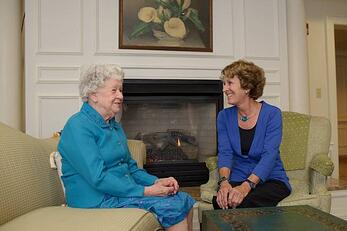 “May you live to be 120!” This traditional Jewish birthday blessing comes from the book of Genesis (6:3).  The Lord said, ‘My spirit shall not abide in mortals forever, for they are flesh; their days shall be one hundred and twenty years.’  There was a time when this wish was at best a metaphor and, at worst, trite and meaningless. The likelihood of living that long is still not reality for most of us, but it is increasingly more within the realm of possibility. We now have centenarians as an ever-growing segment of our population. Is this a good thing? Is it a bad thing? Would you want to live that long?

The answer to how we look at aging usually begins with, “It depends.” In fact, it does depend on so many variables and unknowns. Will I be healthy and physically able to take care of myself? Will my cognitive abilities remain intact? Will I outlive my loved ones? Will my money last as long as I do? Will I be a burden to my family or society? The list is endless. Inherent in these questions is an underlying theme of fear. Aging, with its unanswerable questions, with its unknowns, engenders this fear. Behind all these questions is the fear of losing one’s sense of self and self-worth. If I do lose all these things or even some of them where will my meaning, my sense of self be?

For all those who care for or about someone as they move into and through this phase of the life cycle these questions and their answers determine so much. Do we respond to them with platitudes that dismiss such concerns, diminishing the aging and their fears? “You’ll be fine, don’t worry.” “You won’t get sick, look how healthy you have always been.”  “Don’t worry, things always work out for the best.” Or do we respond with an acknowledgment that the questions and the fear behind them are legitimate. The one for whom we care will likely lose some abilities; will likely be less able to care for self than in earlier years. Money may become an issue. When these things happen the person, in some sense, will be a burden. Dismissing these concerns denies reality, as well as leaving the one needing support feeling unheard and diminished. Empathy is likely the best response. Putting oneself in the other person’s shoes, recognizing we will have the same questions and fears as we age, allows us to respond without answering unanswerable questions, without presuming to know the future (which is not and cannot be known). Empathy allows us to respond to the underlying fear, which is based in an understanding of self-worth and meaning, by offering the one antidote that helps. The antidote is understanding and validation of the person. It is reassuring that someone else sees the fear as acceptable and reasonable. It is helpful to allow the person to feel he or she is normal. In allowing the person to feel acceptable and valued, self-worth is enhanced, as well as the discovery that self-worth and meaning have way less to do with what might be lost as aging takes its toll and far more to do with the person’s intrinsic value as a fellow human being.

Some pundit somewhere said, “Aging is not for sissies.” That pundit was right, but only stated a half-truth. The rest of the truth is, “Caring for the aging is not for sissies.” Both require courage and honesty. Both involve a willingness to explore the deeper meanings of life beyond the physicality, seeking meaning and direction in being a person of value regardless of limitations and deficits. It is a courage required on both sides of the divide of aging.