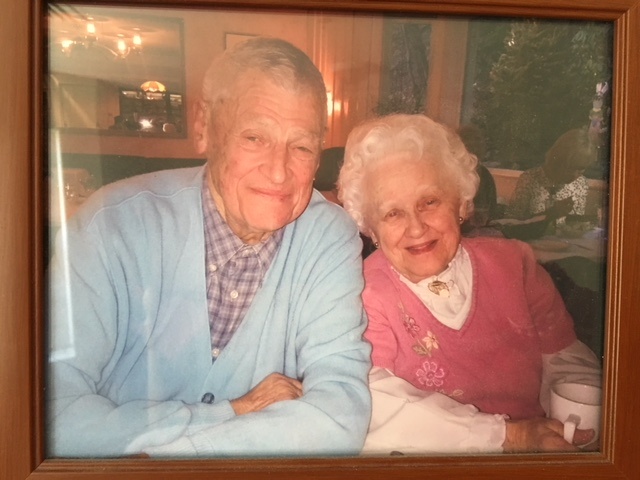 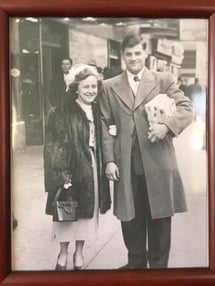 Is love at first sight really possible? Myrtle Caswell, 6 month resident of Middlewoods of Newington, would say “absolutely” and credits her 68 year marriage to true love.

When Myrtle was 20 years old, she was seeing a young man named Bob. One night, Bob asked his friend, Everett, to drive him to see Myrtle. When Bob and Everett arrived at Myrtle’s house she wasn’t home, so they asked her mother where she was. Myrtle was next door babysitting, so they called her up and told her they wanted to come see her. Myrtle said no, and that no one was allowed to come over while she was babysitting. Bob and Everett waited at her house.

Around 10 o’clock, Myrtle came home to find Bob and Everett sitting there waiting for her while eating spaghetti. Bob got up and said hello and then introduced his friend Everett. As soon as Everett stood up to say hello, Myrtle said to herself, “He’s for me, but I don’t know if I’m for him.”

About a week later, Everett called her up and asked her on a date.

The second Myrtle saw Everett, she knew she had fallen in love. “It was love at first sight,” she boasts.

On their first date, they watched stock car racing and Everett took her out to dinner. After two wonderful years of dating, as the pair walked up the steps to Myrtle’s house one evening, Everett stopped her, got on one knee and asked her to marry him.

They were married on November 25th, 1950, the day of a big storm known as the Great Appalachian Storm of 1950. They had a very small wedding at a church, followed by a reception on the third floor of Myrtle’s aunt’s house. 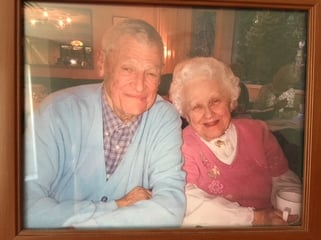 They were supposed to go to New York for their honeymoon, but because of the storm, the trains were shut down and they couldn’t make it that night. The newlyweds ended up staying at a hotel in New Britain on their wedding night.

The next morning, the pair called up their friends and told them they were unable to get to New York. Their friends quickly insisted on driving them, picked them up from the hotel and brought them to Myrtle’s house to get their suitcases. When Myrtle’s mom and aunt learned they were getting a ride to New York, they wanted to come along too. After a fun-filled day in the city, Myrtle and Everett stayed at the Hotel Dixie while everyone else drove back home. 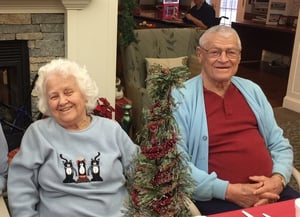 “Always be kind to one another.” This is the key to a long and healthy marriage, Myrtle explains. She recalls one time, not long after they got married, when they were arguing. Everett didn’t want to argue anymore so he picked her up, put her out in the hallway, and would only let her come back in once she said she was done fighting.

Myrtle describes true love as never wanting to be apart, and 68 years later, Myrtle and Everett are still together at Middlewoods. Every morning, they wake up and go to the scheduled morning activity and then exercise together. They also play bingo and enjoy the entertainment offered every Friday afternoon.

It’s very special to hear and see a love story like Myrtle and Everett’s. Do you know a UMH resident who has a particular love story or life story they’d like to share? We’d love to feature them on our Resident Spotlight blog. Let us know at info@umh.org.