Laughing, Healing, and Your Aging Loved One 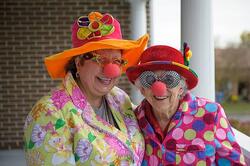 Some years ago we took our nearly teenaged son to the doctor. We did so because he was complaining of aches and pains all over his body.

He was not showing signs of sickness or any overt reason for feeling as he reported feeling. Yet we were convinced that his pains were real. With some trepidation we awaited the results of the examination.

With a smile on his face the doctor announced there was nothing wrong with him other than “good old fashioned growing pains.”

Who knew there was such a possible diagnosis from a medical doctor? We had heard the expression, and likely used it ourselves, but a medical diagnosis? Wow!

I heard echoes of the diagnosis some years later when I took my mother to see her doctor. She was complaining of aches and pains all over her body. Again we were convinced that her pains were real, but we could not see any physical reasons for them.

She went into the doctor’s office with fear of what she would hear and came out with a big smile. “The doctor said there is nothing wrong with me. So I asked him what the aches and pains were all about?

“He said Marion, there is nothing wrong with you, you are just old.”

Who knew? A medical diagnosis for pains from growing old! Wow! On so many levels “growing old pains are real.” They can be expressed physically, psychologically, and spiritually.

They can be expressed through aching bodies, cranky, impatient personalities, and despair and a sense of being disconnected from one’s spiritual moorings. Just knowing that can bring a smile as we relax knowing nothing is wrong, we just have growing old pains. We can deal with them with a sense of calmness when we know what we are feeling is often just part of the process of life.

Having said that, let me add, aches and pains (physical, psychological or spiritual) should be assessed by a competent professional, before being dismissed.

Remembering that growing old pains can be real is an important piece of information as we care for older adults. It will allow us to use humor in a helpful way with those who might find the aches and pains diminishing in importance as we laugh with them.

So enjoy the aging process as much as my friend Kathleen did. In her late eighties at the time, she was having lunch with her friends at the church, when I was aware of loud laughter coming from the room.   Playfully I went into the room and asked what all the noise was about and Kathleen said, “We are laughing at the silliness of old age.”

Laughing at old age is a useful insight as we seek to help those we care for and about with the growing old pains.