Love Stories From Our Residents 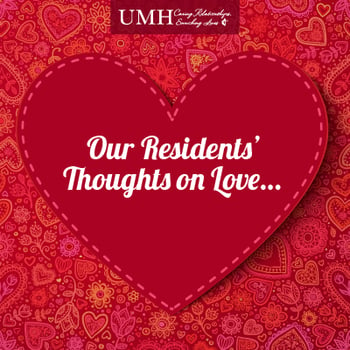 Love is a many-splendored thing…


In our UMH senior living communities, Valentine’s Day can never come and go without the sharing of stories – love stories, of course. And who doesn’t love a good love story, right?

In this article, residents from our communities share their lifelong love stories and a bit of advice, as well. We hope they will inspire you – and warm your heart this Valentine’s day!

Don and Natalie Walkley met in 1946. Natalie, who was a family friend, was waiting (along with Don’s family) for Donald to return home from his military service (USMC). There was a family reception planned. While Don was away, he saw a picture of Natalie dressed in his Marine Corp Dress Blues! His heart skipped a beat, and he couldn’t wait to come home and see her in person. Once he came home, it was simply “Love at first sight!” They dated only six months before Donald ask Natalie to marry him. They were on a date, eating dinner at the Holiday Inn restaurant in Bridgeport and playing the nickel juke box when Don asked her to marry him. She happily said “YES!” Their love resulted in five children, eleven grandchildren and ten great-grandchildren. They were married 69 years!

My (future) husband would walk by my house every Sunday after church and we would talk. I knew I was going to marry him right away. He made me laugh all the time. We were married over 60 years!

I met my husband at work at SNET (Southern New England Telephone Company); we both worked together. We were married 60 years and had a daughter and traveled all over the world. My husband was a gentleman and a scholar and he loved to cuddle! Advice on Love: “Be kind to each other.”

Ruth met Bernie in 1941 in a pharmacy on her way to a basketball game. Bernie actually was playing basketball that night at the Jewish Community Center in Bridgeport. He was a great athlete and well known in the area. While she was shopping Bernie asked Ruth if she would ever go out with him. She replied with “Are you asking me to go out with you?” Bernie said yes. Ruth and Bernie started dating and were engaged about a year later. Bernie proposed to Ruth and took her home to show his parents the ring. They were married on Nov. 30th, 1947. Their love resulted in two children, five grandchildren and three great-grandchildren. They were married 65 years!

I fell in love with my husband that day I met him. We had a big wedding. Advice on Love: “Stay together and get along!”

I met my husband at a dance, but he could NOT dance. He was a hard worker and a good provider. Advice on Love: “Women should not be afraid to speak up and share their thoughts and feelings. Don’t be a doormat.”

My husband lived across the street from me. We talked a lot. We had a big wedding and were married over 60 years. Advice on Love: “Make sure you know him well before you marry him.”

I met my husband through my brother. We fell in love a year later. He took me on a date with his father’s car, but did not know how to drive. We almost got in an accident! We had a big wedding and were married for 60 years. Advice on Love: "Find out what kind of person he is before you marry him.”

Janice met Russel in 1943. Janice, who worked in Hartford, CT, took a train trip down to New Haven to see the Ice Capades show with her girlfriends. After the show the girls stopped in a small restaurant named “Casey’s” for pie and coffee. While they were eating, some of the women from the Ice Capades cast came in to the restaurant. They began chatting with a few Sailors who were from Yale and the B12 Program. Russ caught Janice’s eye and the two began talking. When Russ returned to Yale he mentioned Janice’s name to one of his friends in the Navy program. It turned out that his friend had gone to Wethersfield High School with Janice! Russel then wrote Janice and asked her on a date—to which Janice accepted. The two dated for a year, then were married a year later. On the weekend that they were married, Janice’s parents visited Russel’s parents and were thinking they would bring Janice home when they left. Weren’t they surprised when they got there and the four figured out the couple was missing? They were off in Springfield, Massachusetts eloping! Their love resulted in three children, eight grandchildren and fifteen great grandchildren. They were married for 68 years!

I met my husband at my father’s taxi business. Honestly, I did not care for him at first, but he grew on me; he was nice and was a good provider. He liked to joke around. We had a small wedding. Advice on Love: “Marry someone who likes to joke around!”

I met my husband on a blind date. He was “all right.” We both liked to dance. Advice on Love: “Just get along.”

My husband and I were married 29 years. He was the bread winner and I took care of our home and family. We both loved to dance and used to go out dancing often. I did whatever he wanted and what I learned about love was to always be happy and always agree. We respected each other’s opinion even if we didn’t agree with it. Advice on Love: “Be happy, stay married, and overlook the flaws – things are all give and take!”

I met my husband at a dance. He was a paratrooper in the army. We had a big wedding. He was a very funny man. 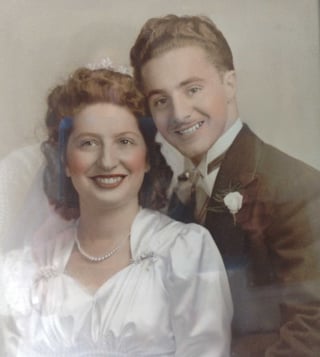 Rose met Dom when she was 18 years old spending time at her dad’s small Italian market. Dom would come by the store and show off by naming prices because he worked at a different store and knew all the prices by heart. Dom asked Rose for her phone number. He called and asked if he could take her out. There was but one condition! She had to take her sister and her sister’s boyfriend with her on the date! The four of them had pizza at Savin Rock Pizzeria and Dom and Rose fell in love. Shortly later, Dom asked Rose to marry him. The wedding was held at Joe’s Castle in Bridgeport. The crowd was fairly large and Dom could not help but remember that the two sets of parents split the bill which was $1.50 per head! Soup to nuts! Their love resulted in two children, two grandchildren and five great grandchildren. They have been married 73 years!

I met my husband in college. We fell in love and were married for 50 years! Advice on Love: “Take your time.”

My husband played football with my older brother. He was 4 years older than me and I thought he was too old for me. He asked my older brother (not my father) if he could date me. We were married for 46 years. He had a wonderful personality and liked to dance and swim. I knew we were right for each other because the bells and whistles went off and I was in love. My challenges then were other women – they all loved him! The joys of our relationship were our children. Advice on Love: “Be a little coy – don’t be so willing to offer too much too fast. There is a lot of give and take in a relationship. You have to take the good and the bad!”

Dick and Claire Babineau both worked at the Bridgeport Brass Company. Dick went into Claire’s office and asked her out on a date. Playing hard to get, Claire told Dick, “She’d have to let him know.” She decided to go and ended up on a double date with two friends at the Bird Land Jazz Night Club. While they were on the date, the waiter made a comment to Claire. He told her, “Why not just get it over with and marry the guy?” Two months later Dick asked Claire to marry him. Two months after that the two were married. Dick remembers he could not wait to give her the ring! Their love resulted in four kids, and 3 grandchildren. They have been married for 61 years!