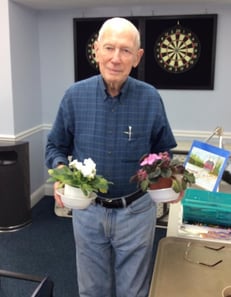 Born in New York City in 1920, James, better known as Jim, has had a life full of love, excitement and travel. Jim’s upbringing was very unique because both of his parents were deaf, which taught him many lessons and offered him a different perspective on life. Jim lived in the Bronx in a suburb called Riverdale where he was valedictorian of his elementary school. From there, he attended DeWitt Clinton High School, and then Stevens Institute of Technology.

Twenty five years later, he received his master’s degree at the University of Bridgeport. Jim became an Eagle Scout, which is the highest achievement attainable in the Boy Scouts of America Program, and was a member of the Air Force, serving from 1943 to 1946.

He went to officer training school for Aircraft Maintenance Engineering and as a second lieutenant, he was sent to Munich, Germany and worked on the reconstruction of the Munich airbase. He was stationed in Sacramento and Arizona as well. Through these endeavors, Jim learned a lot about construction and decided to pursue a career in manufacturing and engineering management. He worked 27 years for Hubbell in Bridgeport and retired in 1986 after three years as project manager, building a 40,000 square foot plant in Puerto Rico.

Jim married the mother of his two boys in 1943, but eventually they divorced, and he met “the love of his life” and married her in 1969. Jim remembers fondly, “We both loved the outdoors. We would ski and backpack and we climbed Mount Washington five times! We skied all over New England, then four trips to the Alps.” They were married for 44 years until she passed away. Jim continues, “My married life was wonderful. The key to a long-lasting relationship is that the other person always comes first. I can’t recall if we ever had an argument…My number one objective was making my wife happy.”

Jim now is a step-great grandparent to eleven great grandchildren. He’s taught his grandchildren how to ski and sail – two of his favorite activities. 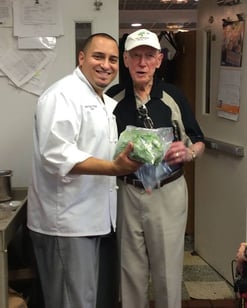 Since his retirement, Jim has enjoyed gardening and continues to pursue this passion at the UMH community, Crosby Commons Assisted Living, where he has lived for two years. The culinary staff of Crosby Commons regularly use herbs and flowers from the garden Jim oversees. Jim explains, “I enjoy the satisfaction of planting a seed and watching it grow.”

Jim says he came to Crosby Commons because the community allows him to remain active. Along with gardening, Jim enjoys the social activities and outings Crosby offers and on the side, continues to enjoy golf with his friends. In the winter, Jim has even been known to cross-country ski on Crosby Common’s property, and he volunteers at Griffin Hospital where he works in the engineering office. 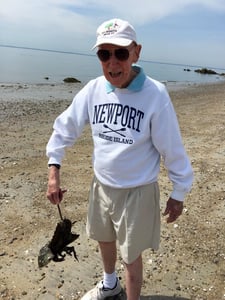 Jim says, “I feel safe and secure at Crosby Commons. It’s friendly and comfortable and allows me to continue to do the things I like and enjoy. I love to help and be useful and Crosby allows me to maintain my independence. I also like my apartment a lot because it fits me and everything is so convenient and close to me.”

Jim believes his life at Crosby has changed for the better because he feels like someone is watching over him and that he’s safe and secure. “I continue to eat well, sleep well, and enjoy people.” Enthusiastically, Jim says that second to marrying his wife, moving to Crosby Commons was the smartest move he’s ever made and suggests that everyone “get on the waitlist early and come as soon as you need our kind of life and care.” 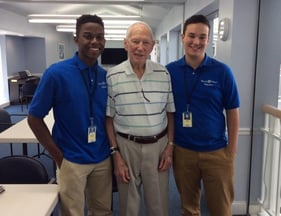 The best piece of advice Jim has ever received was from his father when he told him, “don’t just stand there, do something.” It’s clear to us at UMH that Jim has lived by this advice, always finding a solution to any problem and energetically taking on every day. Jim’s open mind has kept him growing and learning, and we are lucky to have him as part of our UMH family.